Trend Analysis of Used-clothes Industry in Next Few Years

Trend analysis of used-clothes industry in next few years.

I am the founder of jiuyf.com, Jason Fang. Today I will discuss with you about the changes the used-clothes export industry may have in next few years.

The difficulty in employment in interior used-clothes factories will increase.

In the future, I suppose the difficulty in employment in interior upper used-clothes factories will increase. By the current view, this industry is emerging gradually. There were a large quantity of employees coming to working on this industry, which made the collectivity competency grow. The price of the raw material of used clothes increased, as a result, the profits made by the upper merchants dramatically reduced. During the years of founding the used-clothes website, I saw many factories transform or closed, which reveal the difficulty of upper factories indirectly.

The number of lower employees will increased and continue to oppress the upper profits.

In the future, there will be merchants who purchase used clothes joining in this industry which seems to be calm but in fact is full of risks. Most of them are purchasers of the lowest level. The new battle of price has just begun. We can see from the data analysis in the website that the interactive section is relatively active. Our cooperative merchants often receive new people’s consultants who just begin to working on the used-clothes business. Obviously, in the future, they’ll be members of the used-clothes industry.

This industry will be more global.

Among the large number of customers we face, lots of them are from foreign countries. But according to our statistics, most of them are ethnic Chinese. Their foreign business of used-clothes is thriving and they want to find better resources at home. During this process, the problem of language will be ignored, the export volume will increase and even more, some foreign merchants open their factories in China directly for used-clothes supply. On the other hand, many interior upper factories are oppressed by the market and their profits decline. To find a better profit growth point, they tend to open their own companies abroad to sell their products. In the future, this industry will be more global.

The Impact of Oil Crisis in Nigeria 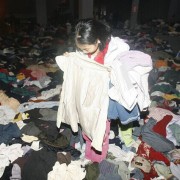